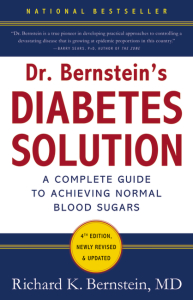 Whether you are newly diagnosed or a lifetime veteran of Type 1 or Type 2 Diabetes, Dr. Bernstein, a renowned and even revolutionary figure in diabetes treatment and diabetic himself, will show you how you could stop the roller-coaster swings in your blood sugars, steady your glucose levels, reduce your insulin intake and enjoy the same level of good health that people without diabetes have. 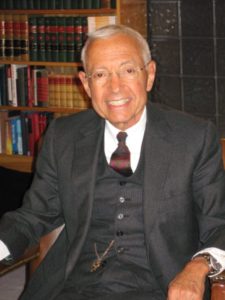 Diagnosed with type 1 diabetes in 1946 at the age of 12, Dr. Richard K. Bernstein never set out to be a doctor. Not only that but according to statistics from the American Diabetes Association, he should have been long dead by now.

That he is very much alive and, in fact, in excellent health, can be attributed to two primary causes. The first is that he was originally trained as an engineer and attacked his disease as a problem to be solved and not a condition to be treated. The second is that he was fortunate enough to still to be alive when the first blood glucose meters arrived on the scene.

He is the first diabetic ever to monitor his own blood sugars.

These facts combined with Dr. Bernstein’s sheer determination to solve the problem of diabetes led to his revolutionary method of blood glucose normalization, which he demonstrates in the groundbreaking, perennial bestselling book, Diabetes Solution.

In 1969, after following ADA guidelines for more than twenty years, Dr. Bernstein had many of the debilitating complications of the disease. Sick and tired of being at the mercy of his disease, he obtained one of the early blood glucose meters. Hardly the cheap and common instrument it is now, the device was intended for a very small and specialized niche: To help keep hospitals from inadvertently allowing comatose diabetics to die at night when their labs were closed, because a diabetic in a coma smells of ketones and can be easily mistaken for someone who has been drinking heavily.

Dr. Bernstein obtained one of the devices at the princely sum of about $700—today, based on inflation, that’s nearly $5,000. Dr. Bernstein used himself as a guinea pig and began testing his blood glucose throughout the day, hoping to discover what made it go up and down. After considerable trial and error, not to mention research, he discovered that he could normalize his blood glucose through diet, exercise and medication—and that he could help others do the same.

Except that when the then-engineer Richard Bernstein tried to persuade the medical community that he had found the answer, the medical community roundly ignored him—even told him that it was impossible. So, in his mid-forties, he decided the leave his successful career in business and go to medical school.

Even when the first edition of his landmark Diabetes Solution came out in 1997, Dr. Bernstein was still battling established notions about diabetes treatment. That’s less true today, but it’s also less important today in the era of consumer-directed healthcare plans and readily available health information on the Web.

Today, many thousands of patients and readers later, Dr. Bernstein continues to see and train patients, maintains a busy schedule that includes a monthly question-and-answer teleconference, and continues to refine his cutting edge program of blood glucose normalization. He reaches more patients than he ever could have back when he first opened his practice—and slowly, too slowly perhaps, the standard of care has been changing to mirror his ideas.

The simple, straightforward program that is detailed in his book Diabetes Solution, is based in good nutrition, healthy exercise, and (where necessary) small doses of medication. Dr. Bernstein will show you what he has learned during his 69 years of living with Type 1 diabetes and how, through intense research and experimentation he developed his unique but simple plan which has helped countless diabetics. “It’s astonishing no one thought of it before,” he says. “Many in the field of diabetes care still do not accept it!” But those who follow the program stick with it for one reason: it works!

Developed almost completely outside the mainstream of diabetology, his low carbohydrate solution has helped patients of various ages and symptoms, young and old. Achieving normal blood sugars is not as difficult as one might believe, and he has included case studies of patients who have experienced dramatic improvements in their diabetes.

Perhaps you or your loved ones may already be suffering from some complications of diabetes, such as gastroparesis, heart disease, kidney disease, retinopathy, frozen shoulder, etc.

admin_ehs - 02/19/2015
0
In Session 1 of Diabetes University, Dr. Bernstein discusses his own experience as a Type One Diabetic, how he developed the personal testing of...

admin_ehs - 01/10/2015
0
Although not directly related to the normalization of blood sugars, this short but important section on foot care has been included because of the...

admin_ehs - 01/10/2015
0
A number of times throughout this book, you’ve come across the terms “delayed stomach-emptying” and “gastroparesis.” As I explained in Chapter 2, elevated blood...

Diet Guidelines: No-No’s in a Nutshell

Full chapters from the book are included on this site! What Dr. Bernstein learned in healing himself – and what he passes along to his patients – is almost exactly the opposite of the prevailing orthodoxy in diabetes treatment. Now you can see for yourself whether Dr. Bernstein’s plan might make sense for you.

Dr. Bernstein will participate in another 60 minute Teleseminar and Webcast on Wednesday, February 22nd, 2023, at 7PM CST, 8PM EST, 6PM MST, 5PM PST designed to answer your most important questions concerning diabetes and his thoughts on the latest developments in this area. The seminar is FREE but participation will be limited and you must register.

Click here to register for the next upcoming call.

The Most Complete, Step By Step Diabetes Solution Program is now available on 5 CD’s or MP3 format ...more >

Dr. Richard K. Bernstein has authored six of the leading books for people managing diabetes who are interested in controlling their blood sugar to prevent the complications of diabetes. The two most recent books, “Diabetes Diet” and “The Diabetes Solution” are used by people across the world to help them in their quest to normalize their blood sugars.

Dr. Bernstein will participate in another 60 minute Teleseminar and Webcast on Wednesday, February 22nd, 2023, at 7PM CST, 8PM EST, 6PM MST, 5PM PST designed to answer your most important questions concerning diabetes and his thoughts on the latest developments in this area. The seminar is FREE but participation will be limited and you must register.

Click here to register for the next upcoming call.